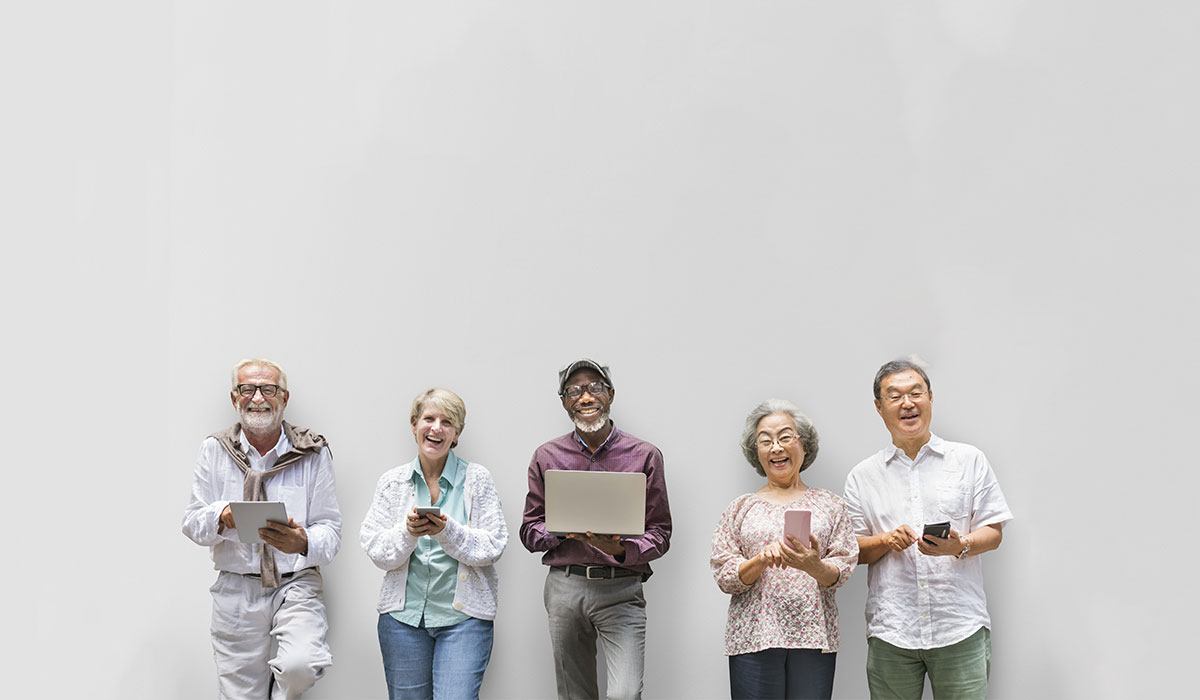 New developments in modern technology have changed the way we communicate, bringing a variety of high-tech devices into our homes and lives. Smartphones, tablets, voice-controlled home assistants, smart appliances, and an Internet that offers an endless amount of information, have become easily accessible to many Americans. While these changes have happened rapidly, leaving some older adults hesitant to adopt new technology, other seniors are embracing it with open arms.

We gathered statistical data to show the relationship between seniors and technology, and we found 25 statistics that reflect the trends that are emerging as more and more seniors adopt today’s technology.

1. 51% of seniors report purchasing a tech product within the past year.

Today’s seniors are using many different types of high-tech devices, and an AARP survey found that 51% of those surveyed have recently purchased new equipment. Smartphones were the top purchase, with 23% of seniors purchasing them. Computers or laptops were the second-most-common purchase, with 12% of seniors purchasing them. Other common purchases included smart home devices (12%), smart televisions (11%), tablets (10%), and wearable devices (7%). Most seniors who own these devices reported using them daily.

An AARP study found that people under age 50 are using tablets less frequently, while those over age 50 are continuing to buy them. Tablets are a great fit for many seniors because they fall somewhere between a smartphone and a laptop, so they work well for using the Internet, connecting on social media, shopping, or streaming content. Because the screen is larger than a smartphone, they are especially useful for those who have low vision.

As many seniors continue to rely more on their smartphones and tablets, the number of seniors who use e-readers is just 19%, which hasn’t changed much in recent years. Tablets offer seniors the ability to read e-books without having to purchase a separate e-reader, so it can be cost-effective for seniors to use their tablets in place of e-readers.

4. 7.3% of seniors use smart speakers at least once per month.

This was as of 2018 and represented a 36.3% increase from the previous year. Smart speakers can be very useful for seniors, who can use voice technology to make emergency calls. Seniors with limited mobility can also use the technology to aid in their daily tasks.

5. 7% of seniors use only streaming services for movies, shows, and series.

Of the seniors who own smart TVs, 7% watch shows, videos, or movies through streaming only; 10% primarily use streaming; 25% use a mix of traditional cable and streaming services; and 22% primarily use cable services. Although many seniors are beginning to use streaming services to consume content, 36% of them only watch movies, shows, or series through traditional cable or network services. This reflects the reluctance that many seniors have about giving up their cable service.

6. 44% of seniors who stream video content do so daily or weekly.

Of the seniors who stream video content, 18% do so daily, and 26% do so weekly. Other seniors use their services less frequently, such as the 14% who stream once a month and the 12% who stream less than once a month. The two most popular streaming services among these seniors are Netflix and Amazon Prime Video.

9. More than half of seniors who own smartphones or tablets use social media apps weekly.

10. 56% of seniors send text messages to loved ones daily.

12. 17% of seniors use voice-activated home assistants.

Voice-activated home assistants are capable of so many tasks, such as playing music, reporting the weather, and getting answers to your questions, and some seniors are benefitting from these devices. While 17% might seem like a low number, in 2017, just 4% of seniors used these devices, so senior ownership of voice-activated home assistants has increased by 13 percentage points over the past two years.

13. 10% of seniors using smart home assistants are very confident their privacy is protected.

14. 40% of seniors would agree to use technology to track their health.

These seniors reported that they would be willing to use technology to assist with health care tasks, such as medicine reminders and reporting to their physicians. Many seniors are open to virtual appointments, with 21% of the seniors surveyed reported they would consider using video conferencing with their doctors in place of an appointment in-person.

15. 66% of seniors are comfortable with their privacy while using wearable devices.

Approximately 75% of adults aged 50 and over say they use social media to communicate on a regular basis. Social media is important for many seniors because it allows them to connect with friends and family even when they can’t physically be together. The most popular social media platform for seniors is Facebook, and 70% of senior Facebook users claim they use it daily. Other popular social media channels for seniors are YouTube, Instagram, and LinkedIn.

17. Three-quarters of seniors who use the Internet do so daily.

Seniors who go online tend to be engaged with the content and their digital devices. Approximately 17% of seniors go online once a day, while 51% do so several times a day, and 8% claim they are online most of the time. Out of the seniors who own smartphones, 76% say they use the Internet multiple times a day.

Many seniors say they need help setting up and learning to use new devices. For those aged 65 and older, 73% need help, and 62% of those aged 50 – 64 need help. These percentages are much higher than younger age groups, such as the 17% of 18 – 29 year-olds who need help.

20. Many seniors (percentages vary) who are interested in purchasing technology items do not purchase them.

While many seniors express an interest in owning high-tech devices, the majority of them do not follow through with a purchase. For example, 59% of seniors are interested in purchasing a front door camera, but only 9% currently own and use one; 48% of seniors want window and door sensors, but only 12% have them; and 42% of seniors want devices to control their appliances, but only 3% have them.

21. 58% of seniors believe technology has a positive effect on society.

Much of this statistical information shows that younger seniors have adopted new technology at a higher rate than those who are older. Older seniors are beginning to embrace new high-tech devices that provide opportunities for them to communicate, socialize, shop, pay bills, keep their homes safe, and even operate their appliances in new ways. Today’s technology has the ability to make life easier for many seniors who are willing to reach out and try new things.

Back to Blog
Request a quote