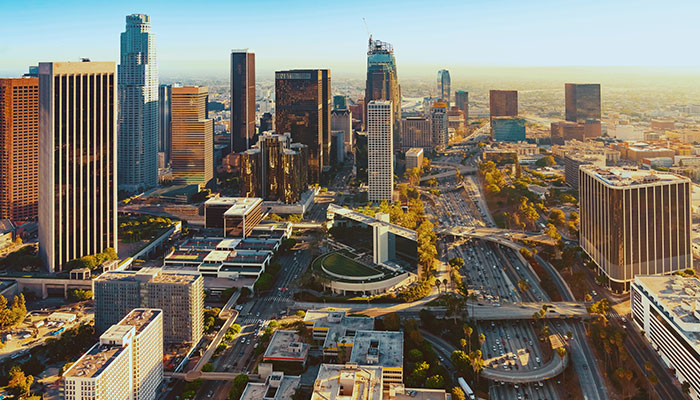 One of the most well-known cities in California, Los Angeles is the birth place of many great ideas and businesses. The founders of California Mobility operate with many home owners in the Los Angeles area.

Every technician from Los Angeles will provide prompt, friendly, and neighborly service. They’ll be quick but thorough and leave no mess behind once the stairlift is installed.

You're just a few clicks away from receiving your FREE Los Angeles stairlift estimate! Begin your estimate below.

Our Most Popular Los Angeles Stairlifts

If you want a stair lift that will ensure comfort and easy access, the Bruno Elite SRE 2010 is the one to consider. It is not only attractive to look at, offering a stylish design that’s sure to blend with your home’s unique aesthetic, but it is simple to use with its control on the armrest and two wireless remote controls. With its many fabric and color options, plush padding, and larger seat and footrest, it’s the go-to for many of our Los Angeles area customers.

Areas We Service in Los Angeles

How Well Do You Know Los Angeles?

The Los Angeles area was originally inhabited by the Chumash and Tongva Native American tribes and was claimed for Spain by Juan Rodriguez Cabrillo in 1542. The city was founded by Spanish governor Felipe de Neve in 1781 and became part of Mexico in 1821 after the Mexican War of Independence. Eventually, Los Angeles became part of the United States when California was purchased through the Treaty of Guadalupe Hidalgo. The city then became an incorporated municipality shortly before California officially became a state in 1850.

Los Angeles is separated from the San Fernando Valley by the Santa Monica Mountains. The San Gabriel Mountains, with its highest point being Mount San Antonio (also known as Mount Baldy), are located just north of the Los Angeles area. Like other cities in the area, there is a risk of earthquakes in Los Angeles, which is located on the Pacific Ring of Fire. There are approximately 10,000 earthquakes annually in the Southern California area, although most of them are so small that you can't even feel them.

When you think of Los Angeles, you may think about its role in movies and television, since Hollywood, one of Los Angeles' areas, is the hub of the world's motion picture and television industries. Major film studios and record labels operate in the area, which is also home to many awards programs, including the Academy Awards, Emmy Awards, and Grammy Awards.

Visitors may enjoy one of the area's many museums, including the Los Angeles County Museum of Art, the Getty Center, and the Peterson Automotive Museum. The city is also home to 11 professional sports teams, such as the Dodgers baseball team, the Rams NFL team, and the Lakers NBA team.