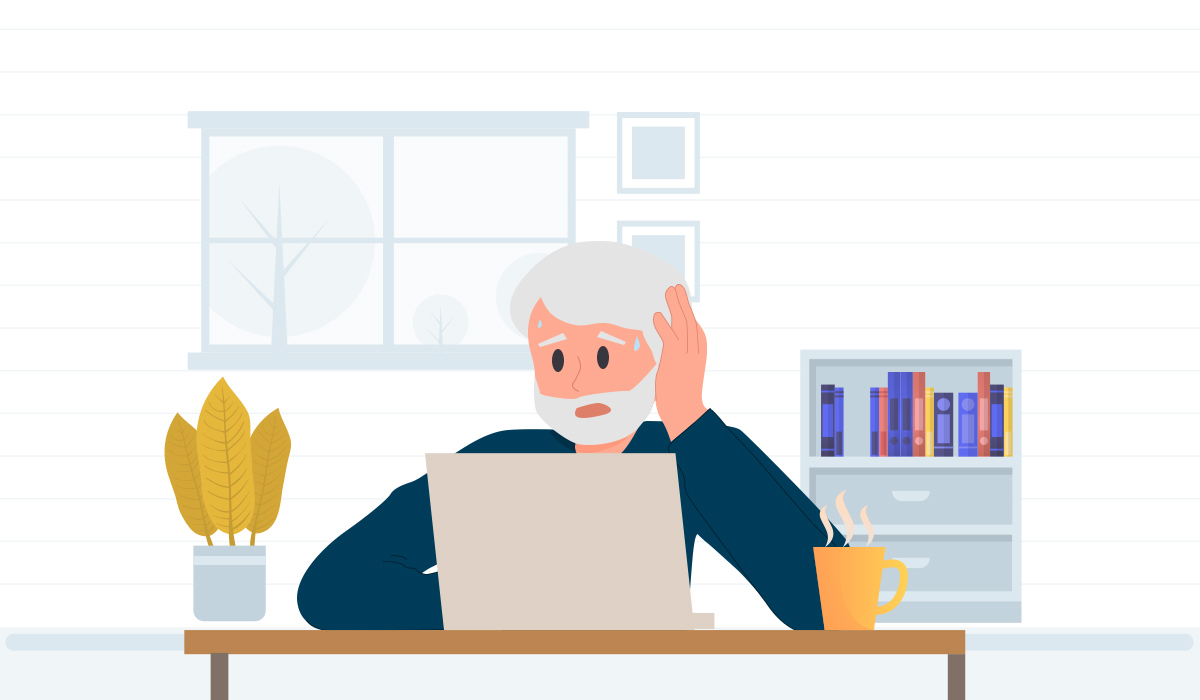 Scammers cheat seniors out of approximately $2.9 billion annually, according to the Senate Special Committee on Aging. No one is exempt from being a potential target of a scammer, and many con artists prey upon seniors who are well-educated and have above-average incomes. They use sophisticated, convincing sales pitches that sound legitimate, making it easy for anyone to become a target.

Being the victim of a scam can be detrimental to seniors’ mental health, making them feel helpless, embarrassed, anxious, depressed, fearful, or distrusting of others. These feelings can affect seniors’ physical health as well, so it’s important to take care of yourself if it happens to you.

By being informed about common scams and taking steps to protect yourself from fraudsters, you can avoid becoming a victim.

Scams by the Numbers

1. Seniors are more likely to report fraud with no financial loss.

Seniors are 93% more likely than younger consumers to file fraud reports when they have been scammed but not lost any money. Seniors aged 60 and over are least likely to report losing money in scams than those of younger age groups. The majority of fraud reports filed by seniors with the Federal Trade Commission (FTC) don’t include any financial loss. This may be attributed to seniors identifying fraudulent activity early and reporting it right away before they lose money.

While seniors are less likely to file complaints when they are victims of fraud, they tend to lose more money than younger consumers, according to Protecting Older Consumers 2018-2019, an FTC report.

The numbers of older adults who experienced fraud increased from the 2017 to 2019 numbers, with adults aged 80 and up losing the most money. The median individual financial loss reported by people aged 80 and older was $1,700, which is a 55% increase from the previous year. Seniors lost four times the median loss of those in their twenties and thirties and two to three times more than other age groups.

3. Tech support scams are the most common scams.

Other scams that create the most financial loss for seniors include those involving fake prizes, sweepstakes, and lotteries.

Seniors are also three times more likely to report a financial loss due to impostor fraud scams, which often involve scammers impersonating a family member or friend asking for money. According to the Treasury Inspector General for Tax Administration (TIGTA), the most common impersonation scam involves scammers claiming to be IRS representatives.

Seniors aged 60-69 lost an average of $6,688 in romance scams, which is more than they lost in any other type of scam. Seniors aged 70-79 lost an average of $10,000 while seniors aged 80-89 rarely reported losing any money to romance scams. Many of these transactions were wire transfers. Sometimes seniors were contacted through online dating sites or social media platforms by others who falsely express romantic interest. These scammers gain the trust of their unwitting victims and convince them to send them money.

Some seniors who think they are in a legitimate romantic relationship with their scammers have refinanced their homes, drained their bank accounts, or even lost their life’s savings in romance scams.

5. Telemarketing scams are the most common contact method for seniors.

Phone scams are the most common types of scams affecting senior citizens. These generally involve payment with credit cards, gift cards, or wire transfers. These scammers may threaten victims with arrest, foreclosure, or even deportation if payments aren’t made.

According to the National Council on Aging, seniors make twice as many purchases over the phone than other consumers, so they are accustomed to shopping over the phone and are comfortable doing so.

Online scams are the second-most-common scams directed at seniors, while e-mail and consumer initiated scams are second and third most common, respectively.

What are the most common types of senior scams?

One of the most common scams targeting seniors involves unscrupulous companies that claim to be selling comprehensive healthcare plans. They falsely claim that they are experts who provide government-sponsored health insurance policies, and some even claim to be affiliated with AARP or be providers of Medicare supplement insurance plans.

In reality, the plans these companies are selling are not comprehensive and have limited benefits. Some plans are medical discount plans rather than insurance plans, and they don’t offer adequate coverage.

These scammers create websites that look official, making them difficult to recognize that what they are offering is a scam.

When consumers click on these ads, they are provided with options for diagnostic testing. This fake testing will reveal that viruses are creating problems for their computers. This “testing” is a tool that these companies use to convince seniors that they need to purchase a service plan to remove these viruses and prevent further problems. Seniors who are unaware of this scam and decide to purchase these service plans are putting their financial well-being at risk when they provide credit card information for payment.

These robocall scammers claim they can help seniors lower their credit card interest rates to as low as zero percent. They claim that they just need to confirm and collect some information to activate this discount.

Scammers involved in this scam trick consumers into providing their credit card numbers, Social Security numbers, and other personal information. They use this information to apply for unauthorized credit cards in consumers’ names.

The new, lower-interest credit cards issued to consumers often have promotional rates that are low for a limited time and will eventually increase. Consumers can also be left on the hook for substantial bank fees or transaction fees.

“Be your own boss. Enjoy your golden years. Fire your boss and build your dreams.” These are just some of the claims you may have seen in ads made by scammers running business opportunity schemes. These ads make unsubstantiated claims that people who purchase their programs or sign up for their services can make thousands of dollars in a short time.

In reality, consumers end up paying thousands of dollars for worthless programs, and they will never get their money back. In addition to investing large amounts of money, many seniors have also ended up with loans or credit card debt to cover the cost of these financial scams.

There are several different types of money transfer system scams that con artists use to steal money from unsuspecting consumers. Some may claim to provide transfer services for a fee to send money overseas. Others may tell you that you’ve won a lottery or cash prize, and you need to send them money to cover processing fees and taxes. Some scammers pose as representatives from charities who want you to transfer money as a donation.

Another common way scammers use money transfer scams is to pose as sellers on auction websites, such as eBay. When a consumer purchases a product and uses a money transfer to pay for it, the seller takes the money but doesn’t send the product.

Some scammers use fake real estate deals to steal money from seniors. These fake companies claim they are selling lots for residential development in new, luxury communities in foreign countries, often in Central America. They claim that these developments will include luxury amenities, such as golf courses. They also claim that since these developments will be completed soon, the value of the lots will increase quickly, providing a large amount of equity for buyers.

These scammers often have colorful brochures that highlight how attractive the developments are, when in reality, the land is far away from utilities, out in the middle of nowhere, or not worth a fraction of the price paid. Sometimes scammers even use fake documents to sell land that they don’t own.

This scheme involves companies that are giving away free trials of their products if buyers pay shipping and handling costs. After unsuspecting consumers sign up for these free products, the scammers enroll them without their consent into an auto-delivery plan for more products at full-price. Sometimes consumers are also charged full-price if these free trials are not canceled within a short time.

Unscrupulous fraudsters have also used this method to scam consumers out of money by charging them for additional products that they did not even purchase. These scammers sell a variety of products, including personal care items, weight loss products, stop-smoking patches, and subscription programs.

Unsuspecting consumers can end up spending several thousand dollars as they sign up for expensive initial anti-aging treatments and then find out they need more treatments to achieve the promised results.

Some of these anti-aging products are nothing but placebos, and some may include harmful chemicals, such as formaldehyde.

How to Avoid and Report Scams

Below are some tips to help you protect yourself from unscrupulous con artists and avoid becoming the victim of a scam.

If it sounds too good to be true, it probably is. Companies that claim their products can cure illnesses, provide miraculous results, take years off of your appearance, or land you in the middle of a luxury development in paradise, are probably not legitimate.

2. Never share your personal or financial information over the phone.

If someone who claims to be from your bank or credit card company contacts you, don’t provide any information over the phone. Instead, ask for a phone number to call them back. Scammers usually hang up at this point. Remember that any companies, agencies, or creditors you do business with will already know your personal information.

3. Don’t buy anything from solicitors over the phone.

If someone tries to sell you something or collect money for a charity over the phone, you should tell the caller that you don’t purchase items or donate money over the phone, and you will need information in writing.

This is a free national registry designed to prevent telemarketers from contacting you. You can register your home or mobile phone to eliminate these calls. You could still receive calls from charities, debt collectors, or political groups since the registry doesn’t apply to them.

5. Remember you may be at risk from those close to you.

According to the National Council on Aging (NCOA), more than 90% of all elder abuse, including financial abuse, happens at the hands of seniors’ family members. Strangers aren’t the only ones who can defraud you, and many family members, including adult children and grandchildren, have drained joint bank accounts and stolen assets from their senior relatives.

7. Make sure your computer doesn’t have any viruses lurking

Viruses can disguise themselves as legitimate programs and become very annoying once installed. You may see pop-ups and ads for services you never subscribed to or have no interest in. The FixMeStick is a virus removal device on a USB stick. It empowers you to clean your own computer from the comfort and privacy of home. Learn more here: www.FixMeStick.com.

If you have been the target of a scam, you should report it to the FTC. Filing a complaint can provide investigators with the information they need to identify scammers and prevent them from harming other older people. You can contact the FTC by phone or online: