Most of us are familiar with run-of-the-mill staircases, but occasionally, someone builds a staircase that blows our minds and overwhelms our senses. An exquisite staircase can inspire and transport us to another time and place, but finding such works of art often proves difficult. No need to search any further – the following ten amazing staircases could be considered the most beautiful in the world. 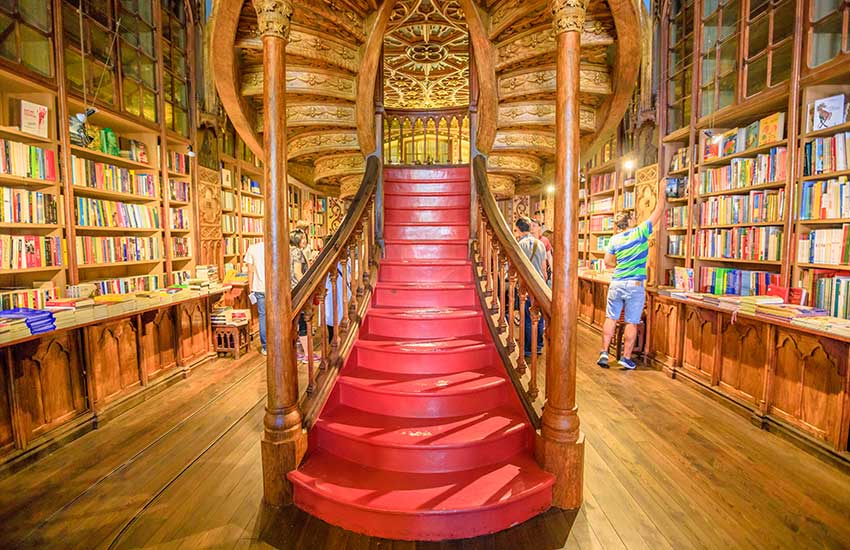 When you visit the Lello Bookstore in Porto, Portugal, the thousands of volumes of historical books will be the last thing on your mind. Considered to be the most gorgeous bookstore in the world, Lello features remarkably breathtaking spiral stairs that command attention. Boasting a stained-glass roof, hand-carved wood, and bold burgundy stairs, the Lello Bookstore staircase will leave you in awe. 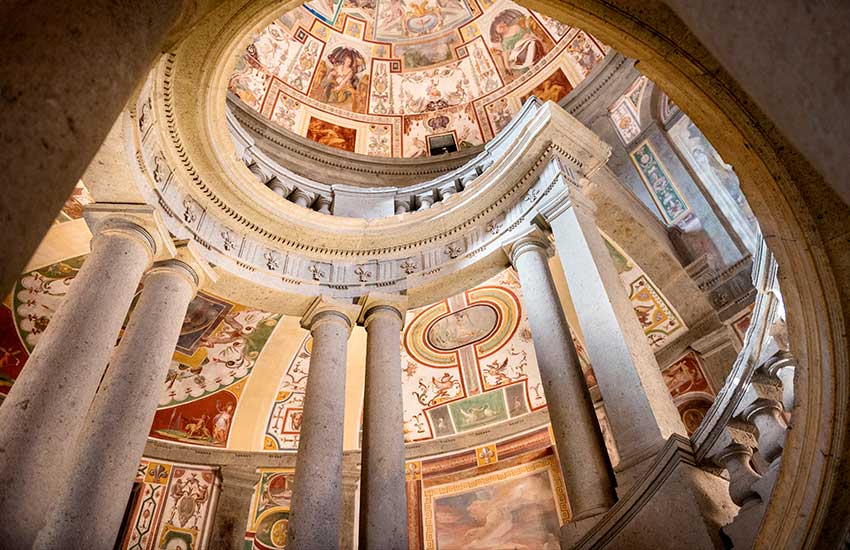 Spanning three floors and flanked with beautiful handmade stained-glass decorative windows, you would never guess this staircase was built inside a residential home. The piece de resistance of the Villa Farnese in Lazio, Italy, these gold-tinted stairs were constructed for a wealthy Italian noble in 1559. Believe it or not, this staircase is only one of five inside the villa. 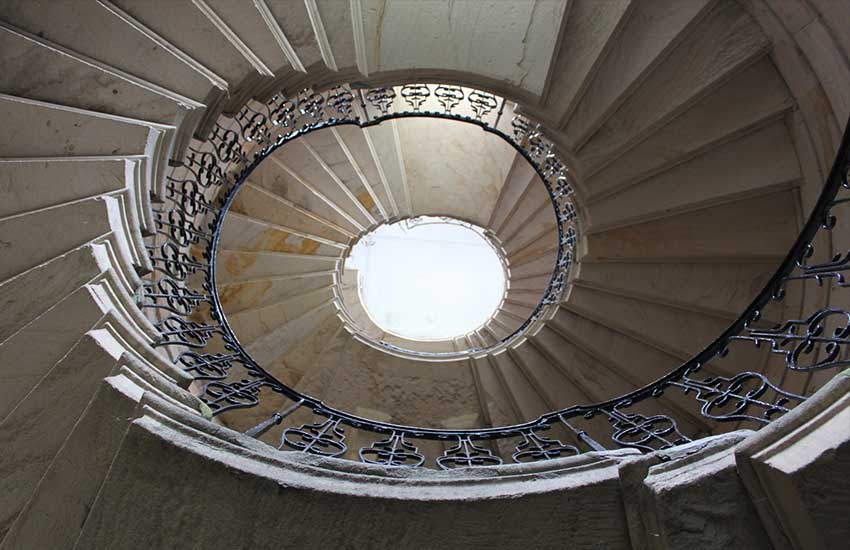 Located in the picturesque countryside of England’s Northumberland County, Seaton Delaval Hall features a lavish yet sophisticated set of spiral stairs fit for royalty. Originally constructed for Admiral George Delaval in 1718, the home and the staircase remained unused for nearly 160 years. Both Delaval and the mansion’s architect died before the home could be fully finished, and although the property passed to Delaval’s heirs, they were more interested in staying elsewhere. 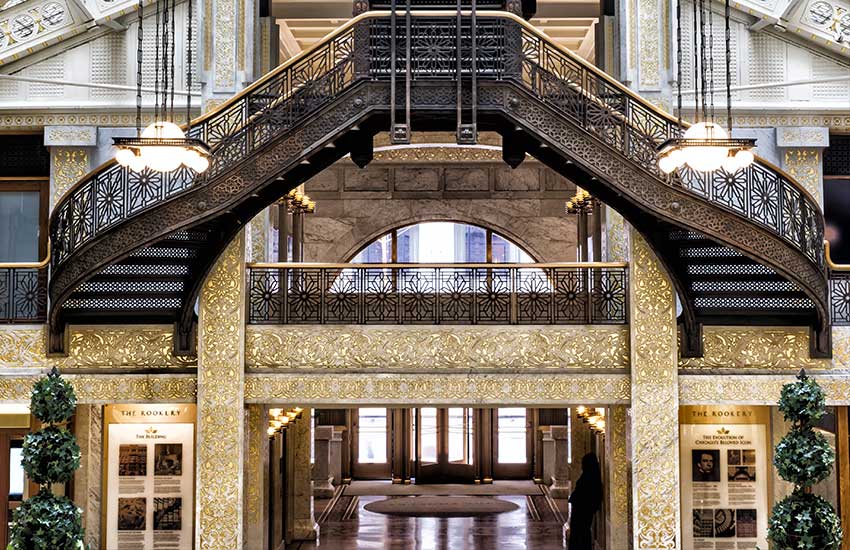 Does a staircase have to reach the ground to be considered a real staircase? Well, not if you ask the architect of the Oriel Staircase in Chicago. The grand vision of architect John Root, the Oriel Staircase only descends from the 12th floor down to the 2nd, but it features some of the most intricate carvings and patterns in the area. Its dark wood railings boldly contrast with its white surroundings, giving it a reflective property that ushers sunlight into the lower lobby of the building. 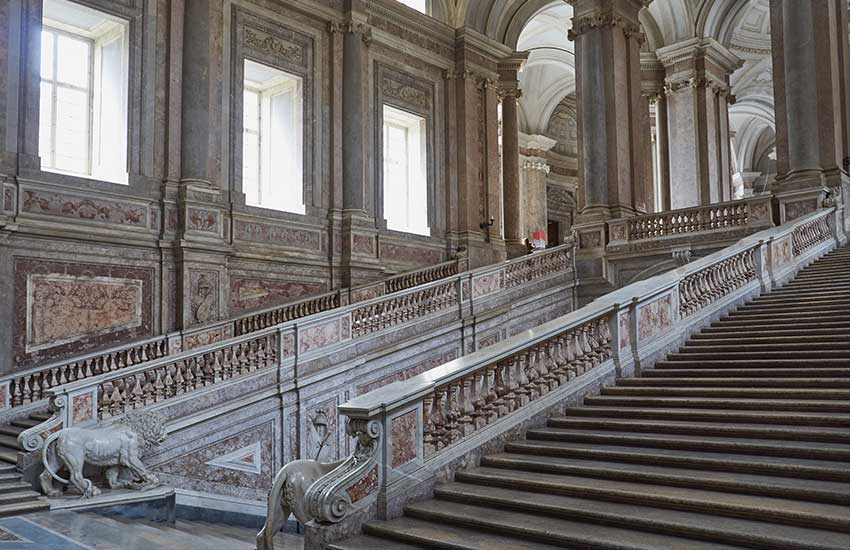 “Palatial” is the only word lofty enough to describe the double staircase in the heart of the Royal Palace of Caserta. If you aren’t impressed by the overwhelming scale of the staircase, you will certainly be in awe of its marble carvings and statues as well as the ornate off-white walls flanking the stone railings. Massive windows placed above the staircase give it an almost sublime aura you won’t soon forget.

Once your eyes gaze upon the interior of the Rubin Museum in New York City, you will instantly be mesmerized by its contemporary curved staircase. Originally designed to leave the shoppers of Barney’s Department Store in awe, the staircase was later moved to the museum. Featuring white marble stairs and an elegant glass railing, the Rubin Museum staircase continues to serve as an homage to modern art and architecture. 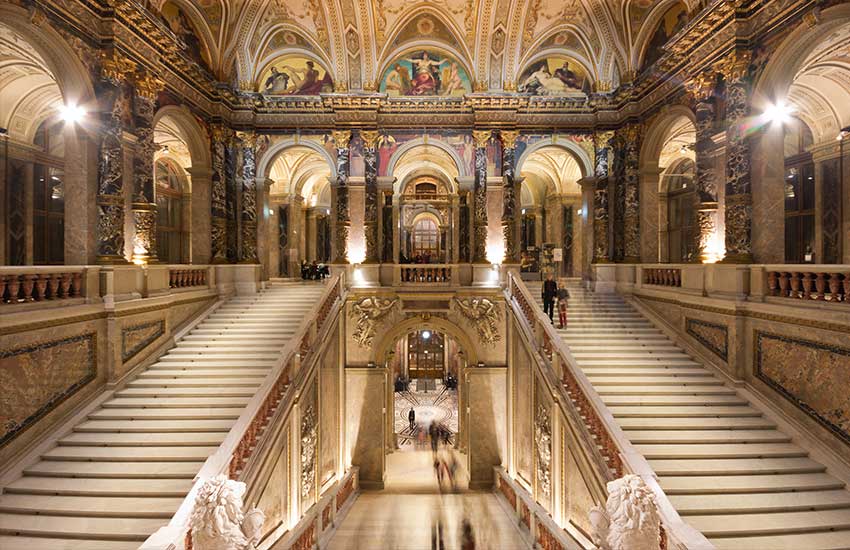 Vienna, Austria is a cosmopolitan city that seamlessly blends its Renaissance and Medieval past with a modern mindset, so it is no surprise it plays host to one of the world’s most unique staircases. Located in the Kunsthistorisches Museum, the stunning double staircase boasts light-colored stairs and cream-colored accents. Above the staircase, grand gold columns and Renaissance paintings command the attention of visitors.

9.  The Carnegie Museum of Art and Natural History

When most people think of Pittsburgh, they think of the steel industry. However, Pittsburgh has managed to transform itself into a renowned cultural and educational hub, so it’s no wonder it is home to one of the most famous staircases in America. The Carnegie Museum of Art and Natural History features a three-story straight staircase with gray-white marble steps and an impressive brown-gold railing. 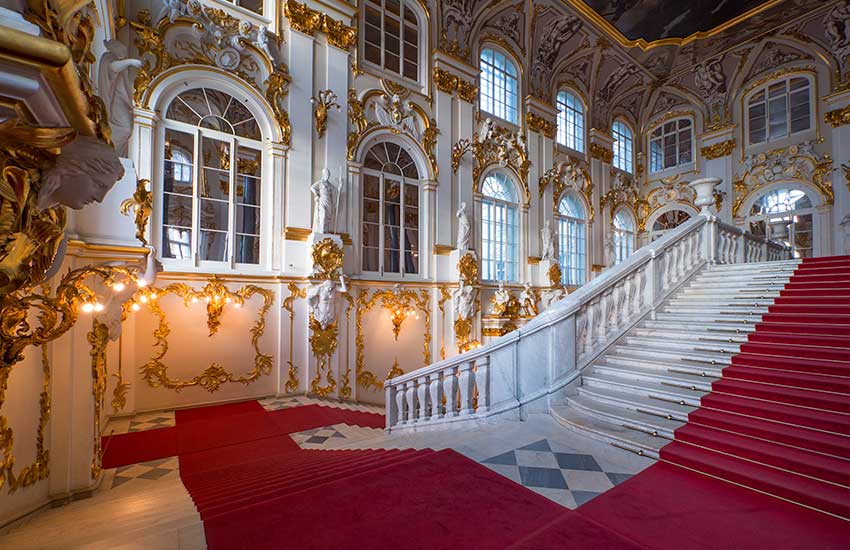 Is there such a thing as too much beauty? If you’ve ever visited the Winter Palace in Russia, you might be inclined to say ‘yes.’ Undoubtedly one of the most elegant and regal staircases on the planet, the Winter Palace staircase was once traversed by the likes of Peter the Great, Catherine the Great, and the ill-fated Czar Nicholas II.

The staircase itself is on a grand, almost unrivaled scale as it transcends several floors of the palace. Accented by dark blue Greek columns, gold and white marble statues, and gold trimmings, the staircase is truly fit for a King or Queen. As you climb this testament to decadence, you can also marvel at the St. Peter’s Basilica-styled mural on the ceiling.

These exotic and amazing staircases took time, effort, and skill to create. Each one is unique to its location whether it was built in a library or palace. There are a variety of buildings and homes that have incredibly designed staircases; though they might not be as grandiose.

Which staircase is your favorite? Is there a staircase we didn’t include that should make the list? Do you have a spectacular staircase? Let us know in the comments below!

Back to Blog
Request a quote